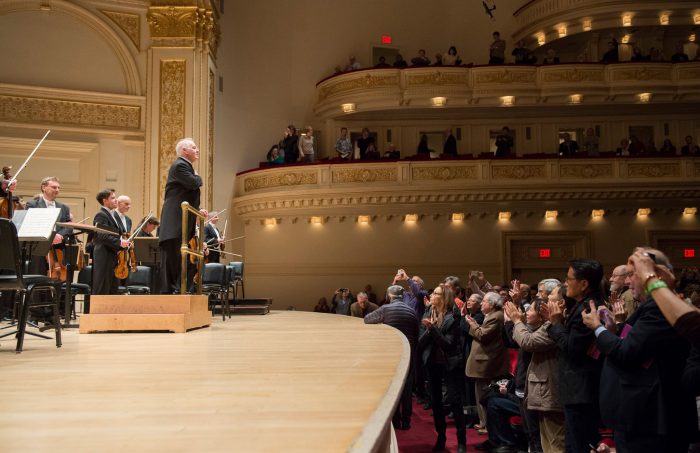 After the pretty evening of the 6th Symphony,I hurried to my hotel. Because I have desired to write down my thougths of the performance with exciting. What a beautifui and moving it is!

If Bruckner’s 6th Symphony is so deep, beautiful, smooth carrying, and will make me feel like drunk with its climax above it, I would like to listen to this song every evening.

Last night’s 5th Symphony was always the climax of the Zyklus at any time, there was a heavy pressure that was also about a man like Barenboim. Just as extremely tense and free play after uplifting is on the sixth song, it is attached to the tact of Barenboim. The feeling of opening of the composer and that of the conductor are completely resonating. This would be the one that peole can experience for the first time when they listen to the Zyklus.

Anyway, how did Barenboim raised Staatskapelle Berlin as such an orchestra? There is no more sighs and praise.

This is a chamber music composed of more than 100 people. Everyone is totally free, leaning over the spacious garden of music.

Barenboim clearly restrained the brassage session until the third, but after unflinching sound with twice the formation in the fifth, this song is returning to the formation with 4 horns, trumpet, and 3 trumpets, however, unlike the previous season, he makes the brass pipe fully open, and create a huge space. It was like the roaring of Leviathan of Coder of the first movement – I was so impressed when I read the probram that distributed at the hall every night, explains the theme of this movement, I thought that I got my will. (While I have a bad English skill, still music is expert so I can understand it).It is much better than The one in Japan. I would like to say that it is possible to make something comprehensive as there are many excellent music scholars in Japan. I write a good one if I can ask – The whole orchestra plays in more over than the full volume, and it makes me feel like my face will fall down to a strong punch which I can not do anything anymore.

However, its strength is extremely musically fulfilling. No matter how much the brass pipe roars, the string does not disappear at all. Not only that the woodwinds even does not disappear. The taste of the integration of this whole sound is unheard of. The heyday of Celibidache was sacrificed in motility and spontaneity in order to produce a sense of transparency, which was stunning, but Barenboim’s is not a translucent feeling of adjusting up to the overtones. I’d listened Solti’s Bruckner in live, but it has been completely into a brass band’s Symphony, but a brass ring that echoes more richly than that does not erase other parts. And how about each part performing dynamically and enjoying their songs as a free dance?

Moreover, the achievement of the orchestra is not only advanced to unheard yet, it is full of the depth and musical meaning of their songs!

Even though the second movement is not doing anything special and when it is overflowing with such a clean song, wailing from the bottom of my heart, pleasantly moving across the pleasures, and the goodness of the flowing carrying the logic of music is visible It does not flow (like Karajan did), and the taste of the musical meaning is deeply handful. Following the second theme like a child’s innocent dream, as if suddenly a funeral march flows. This innocent dream is an extremely serious music dramas, but Barenboim has connected the two with an overwhelming sustained feeling, while dreams and funerals were never another phenomenon, indicating the essence of life. The pleasures of Scherzo will not wait for say. 4th Movement, no more to write! From the glittering pleasures to the enormousness at the end of the song that turns into a recollection of the theme of the giant one movement feeling, I feel like getting along with anything anymore.

The fever of the audience is the same as yesterday.

Even so, I wondered why the most famous 4th Symphony was not so excited, but because it is the best known Bruckner’s Symphony, there might be many audiences who did not know much about the music I guess. That the crowd of the audience coughs and noise is terrible all the time, but that day was extraordinary, I could feel just a little difference wiht the atmosphere, “Ki”, while listening to number 5. The audience in the venue was not calm. After the performance, Barenboim had pulled into the sleeve with the second curtain call, and the clapping of the audience seemed like disappeare while the orchestra still stood up. In other words, they are just the audience like they are, and the performance is also sluggish. It may be 90 points if you score it. Today may be 93 points. However, the outstanding-ness in art is determined by the accumulation of whether there is the subtleness of this last breath.

Today, how much the audience was excited to this minor 6th Symphony, and in a crazy mood even after the show.

Well I guess it’s enough. I’m starving. It’s time to go out to the bar that opens till midnight to grab a glass of sake.